The year of Ewing


Some birthdays are big milestones. Every youth knows turning 18 means the courts can officially try them as adults. Turning 21 gives people the right to enter a bar and spend $7 on a drink that is worth about 85 cents. The 29th birthday is always a big one, and I have been told my grandma celebrated that birthday at least 25 consecutive years. Of course turning 40 means two things: First, you are now officially old and second, your kids, who are probably teenagers, think you are not only officially old, but officially lame, officially embarrassing, and officially dumber than they are. That is a lousy birthday. 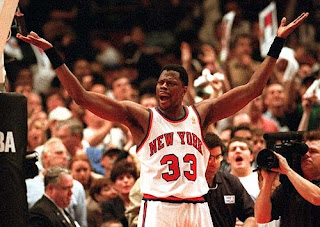 But this past week I had a great birthday. I turned 33, which we officially deemed "The Year of Patrick Ewing" as the legendary Knicks big man wore number 33. Next year will be "The Year of Charles Oakley," but the following year I'm going to ignore my birthday altogether because I refuse to live through "The Year of Clarence Weatherspoon" considering at least 98 percent of his shot attempts were blocked and his teams always, well, sucked. He would have been better suited playing for the Milwaukee Brewers where sucking is expected and nobody attempts to block your at-bats, but if they do, you can simply take drugs like a dirty, dirty cheater (Ryan Braun) to make yourself better.
(That last sentence was in response to a column written in the Leader-News a couple weeks back by a Brewers fan that discussed Baron Davis, a former Knicks point guard who claimed to have seen an alien while in Las Vegas. I would simply counter anybody poking fun at that claim by saying if you have been to Las Vegas and NOT ran into an alien, you never left your hotel room.)
Anyway, to celebrate The Year of Ewing, we needed to do something big, something grand, something exciting, something we had never done before. So we loaded up the family in the Jeep and headed to Wing for a movie night.
You may not have realized it, but Wing has a movie theater. And it is awesome. Tickets are $5 for adults (our kids were free), popcorn is 75 cents (you read that right - 75 cents!) and  pop is 50 cents or a buck, depending on how big of a cup you want. We wanted the big cups. It was the Year of Ewing after all.
If you have not been to the Wing Theatre, it can best be described as a simple little building with crumbling steps out front and plain padded chairs lined up in front of old church pews on a hardwood floor. There is a chance the big screen at the Grand Theatre in Bismarck is bigger than the entire Wing Theatre, but then again you have to mortgage your house if you want popcorn while you watch the feature there.
On Sunday night they were playing Monsters University, which seemed like a great idea for a family film. At least until you consider the movie is all about monsters learning how to scare small children, which is why Dan the Broken Leg Man quickly moved from his seat onto my lap about 27 seconds into the movie. But the movie wasn't really that scary for the little guy, and I expect he will start sleeping again by the end of the week.
This was the first movie theater experience for both Elizabeth and Dan. Elizabeth was pretty confused by what was going to happen, especially since in the Wing Theatre the screen sits on a stage. She kept asking "When are the people dressed like monsters going to come out?" She was expected a full-blown Broadway theatric stage experience, but since most Broadway shows have a cast bigger than the population of Wing, that seemed unlikely to happen. 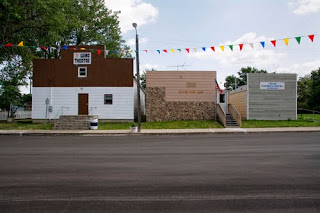 But when the lights went down and the movie came on (which Elizabeth realized once she got back from the first of many trips to the bathroom), the kids' eyes were locked in. I don't think Elizabeth blinked for an hour and a half. Dan snuggled into my lap while clutching his popcorn box. He basically forgot to eat popcorn for 90 minutes, but he never put it down.
When the movie ended a woman came out of the ticket booth and announced the winning ticket numbers for the evening. I checked out movie stubs and our numbers were not the winners, which is probably good because I have no idea what the prize was. There is at least a 50 percent chance the winner had to sweep the floor and stack the chairs.
On the drive home everybody agreed it was a great start to the Year of Ewing. And as we tucked the kids into bed, both of them still talking about the movie, I did what any good 33-year-old father would do. I told them I loved them and then, without hesitation, promised them the Knicks would win the title this coming year. It's what Patrick would have done.

Posted by Cory Neumiller at 6:39 AM