It was not very fair of me in last week's column to use the new royal baby to take a shot a the British peoples' poor dental practices. If I wanted to pick on those cheeky folks, it would have been better to have simply pointed out they eat foods horrible foods like "Tripe" and "Haggis" which are basically the parts of the cow and sheep that hotdog companies reject, their royal guards wear giant q-tips on their heads, or that they produce sitcoms so boring they get canceled by PBS. 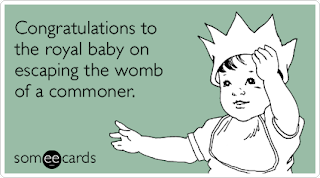 I know this first hand from a month Nicole and I spent there during college studying Shakespeare. Yeah, we were nerds. No doubt about it. And my digestive system is still trying to heal itself 11 years later.
Regardless, I'm not here to pick on our British brethren (the same guys whose tea and crumpet butts we kicked back in 1776). I am writing today in an attempt to bring us closer. In a move that could only further strengthen the United States and England's relations, today Neu's Ramblings is presenting tips to Prince William and Princess Kate on raising their new baby boy. Mostly we will focus on what they should not do because it is easier not to do something than to actually do something. And I like easier.
Don't name the kid George. Every single headline in the British tabloids is going to say "By George!" whenever he accomplishes something or "Buy George" if he ever takes a bribe or "Bye George!" whenever he goes somewhere or "Bi-George" if, um, never mind.
Don't let the baby hang out at all hours of the night with Parliament. Those guys in the wigs get CRAZY.
Don't set expectations too high for the baby. For instance, tell the little one that he can grow up to be anything he wants, from a garbage man all the way up to and including (but only if he wants) the king of England. Pretend like you would prefer he be a garbage man.
Don't hock the crown jewels for anything less than genuine Pampers.
Don't expose the baby to sunlight, don't get the baby wet, and don't feed the baby after midnight or he will turn into an evil monster. Wait, that might be the plot of Gremlins.
Don't let him drive around with James Bond. Even if 007 straps him into a government approved car seat, chances are it will not be a safe ride. 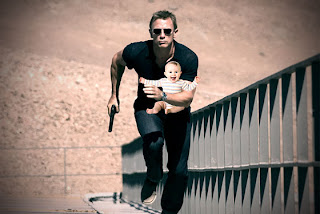 Don't tell him Jack the Ripper is dead. That way, when it comes time to potty train, you can tell him Jack the Ripper is looking for little kids who wet their pants. Problem solved.
Don't let the kid watch British sitcoms. It will depress him something terrible if (and this is a big IF) he is able to understand what the actors are saying. I don't care what anybody says: What they are speaking is not English.
Don't tell little Baby George that you are going to a "Football game" and then make him sit through a soccer match. That's just cruel. He is going to want to see the Patriots play the 49ers.
Don't feed the kid British food. Ever.
Don't spend money on one of those baby monitors for the nursery. Instead, ask Scotland Yard to bug the room.
Don't just assume you can drop the little one off at Great-grandma's house whenever you need a night out. She is a little busy.
Don't tell him bedtime stories about his Great-great-great-great Aunt Mary Queen of Scotts. The beheading thing at the end might give him nightmares.
Don't use the Tower of London as the kid's Time-Out punishment spot. Even though that would be really, really sweet.
Finally, do buy the kid a toothbrush. Right away. Even before he has teeth. It can't hurt.

Posted by Cory Neumiller at 6:36 AM