The Mecca of S.D.


When I last left you (that sounded like the opening to a country song) we were on a family vacation and had just arrived in Spearfish, South Dakota. This is the first town our daughter Elizabeth the Lizard made a friend, mostly because it was the first town we let her out of the Jeep. 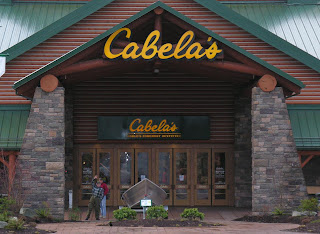 We stopped at a restaurant to eat where she quickly explained to the lady running the till that we were from North Dakota, we lived in the country, we have a horse named Hot Dog, one of her goats just had babies, we were going to a wedding, she was going to dance, she brought a pretty dress with, she hoped to see a boy named Gentry, her little brother Dan is still one year old even though she is five, her mom teaches Spanish and her dad coaches basketball. The lady at the till simply wanted to know if we wanted medium or large fries. And if you think that was a run-on sentence, you should hear Elizabeth talk.
It was like that everywhere we stopped. If anybody simply looked her direction, she gave that individual a quick rundown of her life story. At one point during the trip she asked a waitress, "Do you know my grandma?" Surprisingly, the waitress did not. But about five minutes later she had a pretty good idea about grandma.
On the other hand, Dan the Broken Leg Man just smiled. That is pretty much what he did for four days, except on the way home, but we'll get to that later. As a matter of fact, he was often so quiet in the Jeep I would ask, "Is Dan in the Jeep?" just in case we forgot him somewhere. I'd look in the rear view mirror and he'd smile back at me and still not make a peep. It was wonderful.
We didn't do much in Spearfish other than sleep, but bright and early I got the family up the next morning because we were only an hour away from what I consider the Mecca of South Dakota. That's right: Cabela's.
(You maybe thought I would say Mount Rushmore. It is a nice place, some would say historic, but just try to buy a trolling motor there.)
I had been selling Cabela's pretty hard to Elizabeth for the past couple months. If you use an excited voice and act like something is the coolest thing in the world, pretty soon your kid believes you. Except Brussels sprouts. That trick doesn't work on any vegetable that nasty. But Cabela's has chocolate and stuffed animals, so it was a pretty easy sell.
When we drove into the parking lot, Elizabeth was almost foaming at the mouth with excitement. I was for sure foaming at the mouth thinking of guns and fishing rods and knives and cast iron fry pans and thermal underwear (It was a cold spring). 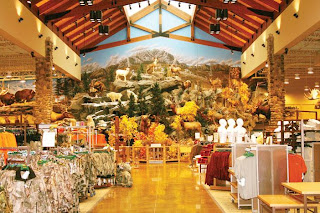 Lizard and I were immediately off, leaving Nicole and Dan in the dust. We went to the mountain, we went to the fish tank, then we circled the store six or seven times. But here is where it got weird: While we were checking out the sites and Elizabeth was telling family secrets to any Cabela's employee who happened to ask if we were looking for anything in particular, Nicole was filling up a cart. She was doing some serious shopping.
I've been on the outs with the Man Card committee ever since I bought and quickly sold that minivan, and just when I was about to get my Man Card back, I was outspent by my wife at Cabela's. Now I have three more years probation before I can reapply from this little incident. But it was worth it because if Nicole likes Cabela's, there is a chance I get to go back there again. At least once the credit card quits setting off smoke alarms.
From there, we headed deeper into the Black Hills to find the one place Nicole really wanted to go. But that was boring and we're about out of space, so never mind about that.
Anyway, next week we will continue on with day three of this rambling vacation story. Just be glad I can't somehow fit a slide machine in this newpaper.

Posted by Cory Neumiller at 4:52 AM