This may come as a surprise to you, but it is possible country music superstar Kenny Chesney and I live very different lives. For instance, while he is mostly bald and covers his bare skull with a cowboy hat, I have all my hair. Not to pick on the poor guy or anything, but that is just a fact.
Another difference is his girl thinks his tractor is sexy. He sang a whole song about it. "She thinks my tractor's sexy," he repeats about a hundred times in the chorus. She even brings him fried chicken and sweet tea during the song to try to convince him to take her for a ride. 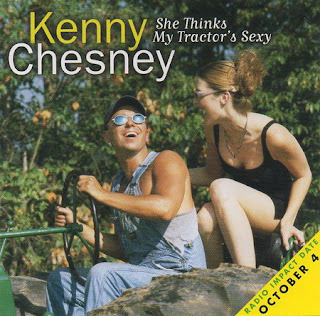 My wife, on the other hand, hasn't made fried chicken since we were dating and finds very little romantic about tractors. I have found this repeatedly over the last seven years we've lived here on the ranch. Take for instance last week when I called her from an auction sale.
"Hey Honey!"
"Yeah?"
"Wow, you sound particularly charming this morning. I wish I was there to stare into your beautiful eyes."
"What did you buy?"
"Why do you think I bought something?"
"Quit stalling. What is it?"
"A tractor."
"ANOTHER TRACTOR?!?!"
There was more to the conversation, but this is a family show, so we will end right there before things get rough. Let's just say that she did not start frying chicken and brewing sweet tea when she hung up the phone.
Yes, I did buy another tractor. In the last seven years, this is the fifth one I have drug home (notice I did not say "drove" home. A vast majority have been drug home). But I had a good reason to purchase this one, which I explained to Nicole. You see, I have a Polish wife (maiden name is Jastrzebski) and a Russian rifle (a Mosin Nagant), so it seemed a good idea to buy a Belarus tractor to bridge the gap as Belarus is the only thing standing between Poland and Moscow.
That explanation sounded better in my head, which is where I should have left it. Especially since my Polish wife starting eyeing my Russian rifle after I brought home the Belarus tractor.
This new tractor has many features my Oliver 1555 tractor doesn't. For instance it has a cab, which for the past few years doubled as an apartment for a small but growing family of mice. It has a heater that has kept me nothing but warm this past week while loading bales, even though the 90 degree sunny days have probably helped with that too. And it has brakes. I have never, not even once, owned a tractor with working two brakes. I probably won't use them anyway, but it is nice to know they are there.
A while back I wrote about the Russian rifle I bought and how when you need ammunition for it, you simply send a bottle of vodka to a fellow named Ivan over in Chernogolovka and he would dig around in the ground for old military ammo, and when he found some, if he sobered up, he would send it to America. With the Belarus, there is no such reliable system for finding parts. As a matter of fact, it is downright difficult to find new replacement parts. 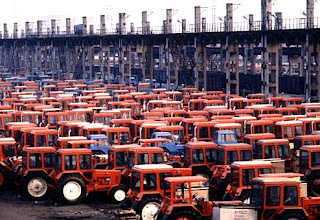 Since the Belarus tractors are factory made out of the finest recycled beer cans available, you pretty much have to custom fabricate your own parts. I even came up with a simple three step program for building parts.
Step 1: Buy a case of Budweiser.
Step 2: Pour it out. No sense drinking anything as awful as Budweiser. Seriously.
Step 3: With a hammer, roughly form the part you need. That is how they do it at the plant, so it should work for you.
As you can tell, parts just take a little work and a little imagination, but cost less than John Deere parts, which you cannot buy for $18.99 a case at any gas station in town.
Finally, and maybe most importantly, my new tractor has an AM/FM radio. I have spent several days in the tractor searching the stations for old Kenny Chesney songs, which none of the stations play, because none of the radio stations in this world have played a decent song since I graduated high school. I bet that has happened to you too. But that's another story for another day.

Posted by Cory Neumiller at 1:42 PM