You may be thinking, "Oh great, Neumiller is STILL writing about his lousy family vacation. Can't he find something else to lie about this week?"
The answer is, sadly, no I cannot. You see it all comes down to accounting and the IRS. Since I did not vote for President Obama in the last election, the IRS has been directed to make sure I write at least three to four thousand words about a topic before I can deduct any of the expenses I accrued researching that column. However, any writer who voted for Obama only needs to write a small paragraph to qualify for deductions, and every sentence in that paragraph can end in a preposition. You don't even want to know what you have to do to qualify for a deduction if you write articles for the American Tea Party Against Illegal Immigration, Recording of Phone Records, and High Taxes (But Loves Guns) magazine. 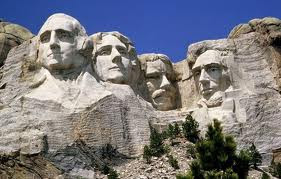 Anyway, last week we ended this column by leaving Cabela's in Rapid City. From there we headed to Mount Rushmore because, as those of you who have been to South Dakota know, it is the law. If a South Dakotan finds out you were in their state and didn't go to Rushmore, he is allowed to drive to your home, abduct you, and take you back to his home and force you to watch reruns of Tom Brokaw newscasts (South Dakota's only famous person) from the 80's as punishment. They take their Mount Rushmore seriously.
Flashback alert: The last time I was at Rushmore I was almost arrested, but this time went better. Back in 2002 when Nicole and I were dating, we went down there for a weekend of camping in the Black Hills over spring break. Some people go where it is warm. Others of us go to where the black bears are just coming out of hibernation. Since we were camping in a little tent (the smaller the tent, the better when you are dating) I took with a .44 magnum handgun just in case a bear decided we looked delicious.
After camping for a night, we went to Mount Rushmore where we were met by a Highway Patrol who asked if we had anything dangerous in our car (this was a few months after 9/11). I said there was a gun in the trunk. He was not impressed. At that point he asked if he needed to bring in a drug dog. I made the mistake of saying, "I don't think so."
Apparently the only correct answer was "No, sir!" Pretty soon he was digging through the trunk of the car and calling for backup. The next officer brought this big mirror thing to inspect the underside of the car. When it was all said and done, he gave me a good lecture about firearms (even though I was 100 percent legal) and made me take the air freshener off the rearview mirror because apparently that was against state law. I was relieved he didn't take me to the state penitentiary to watch Tom Brokaw for three to eight years. 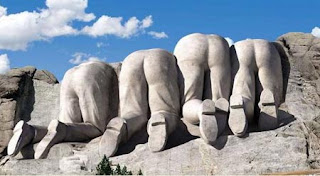 Fast-forward alert: This time the only person who talked to us before we entered Rushmore was the lady who needed $12 before we were allowed to park our car. She never once asked about guns or drugs. Since it was the Saturday of Memorial Day Weekend, there were approximately 73,000 other people there (72,950 of whom were from east Asia) so she must have decided to cut out the friendly chit-chat we received last time.
Both Elizabeth the Lizard and Dan the Broken Leg Man were pretty impressed with the stone faces. Lizard wanted to get as close as we could to the base of the monument so she could look up the presidents' noses and see if there were any boogers. That's my daughter.
We did the "Strenuous Trail Loop" which was only strenuous if you get winded walking to the refrigerator from the dining room table and did the touristy thing of taking lots and lots of pictures where it looks like one of us is picking the nose of Abraham Lincoln (And you wonder where my daughter gets it from).
From there we headed to the final destination of our trip, which was my buddy Dave's wedding. But we'll save that for next week. Take that IRS.

Posted by Cory Neumiller at 4:54 AM