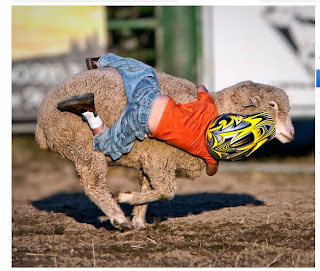 “Get me out of here!”
“Whatever you say kid,” and he jerked the gate. I think something was lost in the translation.
I tried to remember what dad had said about the sheep. Something about it going hard to the left, or was it to the right? It didn’t really matter. I found out later that sheep don’t spin. As a matter of fact, most sheep have taken a geometry class in their high school days and know that the shortest distance between two points is a straight line. Wilma was an honor student. She took off for the opposite end of the arena at a sprint.
I had heard all of the stories about famous eight second rides and how the old timers stayed on even after the whistle sounded, but I considered myself an innovator, so I tested out my theory of a two-second ride. I bailed off the sheep, some would dare to say fell off, breaking the fall with my head, which is probably why I am how I am today.
As I tried to get my directions straight, Wilma turned in the arena, pawed dirt, and came back for me. Some in the crowd claimed my second ride was longer than my first, but the judges deducted points for style. Something about holding on to the sheep’s ears and my legs wrapped around her belly seemed to take away some of the elegance and grace of my ride.
Just a short week later I was back in school, the Twins were two and a half games behind the White Sox, and summer was but a memory, at least what little I could remember with the concussion and all.
Posted by Cory Neumiller at 7:47 AM